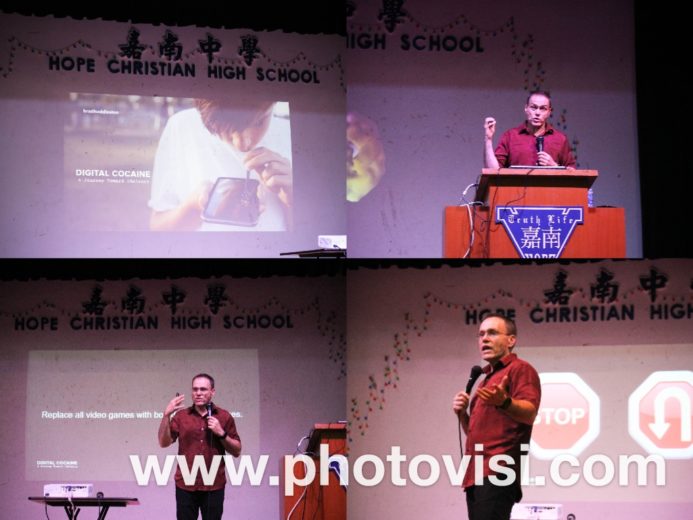 On October 10, 2018, Pastor Brad Huddleston graced Hope Christian High School to speak about the danger of too much screen time to students from Grades 6 to 12.  He presented brain scans which have been exposed to gadget screens for long periods of time, and compared it to brain scans of people addicted to substances like cocaine, alcohol, and marijuana. The scans show the same image. Pastor Huddleston added that the same worrisome brain effect is seen regardless of the gadget content, be it educational or recreational.

According to Pastor Huddleston, the evident symptoms of screen addiction are anxiety, depression, anger, and emotional numbness (or loss of emotional feeling or compassion). He shared that it would take three months to fully detoxify one’s brain from the effects of screen addiction. This is because watching videos or playing games in our gadgets releases the hormone dopamine in our system. After some time, our brain blocks out the dopamine, which causes us to want more screen time so we can feel dopamine’s effects, and the vicious cycle goes on.

He also mentioned that there is no such thing as multitasking, and that no created being can ever do it.  Trying to do too many things at once only confuses one’s cognitive processes.

Going “analog” (or experiencing our world physically and not digitally) is the best way to resolve this digital addiction, Pastor Huddleston concluded.  He recommended zero screen time for children 0-10 years of age, and only 20 minutes screen time for children aged 11 and up.  He encouraged everyone to really play instead of spending time using gadgets.  Lastly, he reminded the audience that gadgets are not supposed to be a replacement for babysitters.