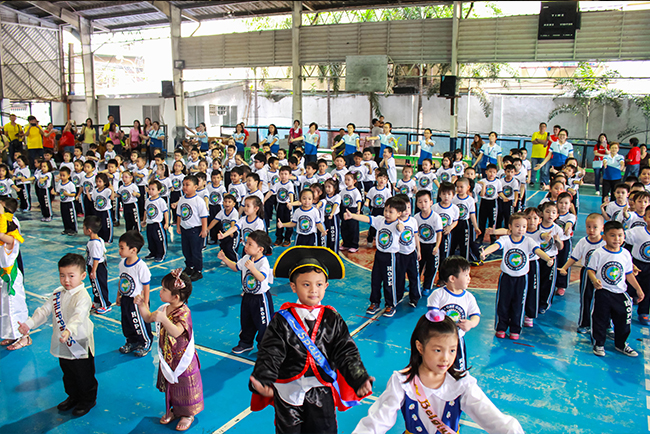 Since United Nations Month is a month-long celebration, several activities were planned for the pre-schoolers last October. Art activities, song and dance presentations became the primary means to instill in the children the appreciation for different cultures and the importance of peace and unity among countries. In addition, the Preschool Department conducted their annual Family Day on October 20 with the theme “One Family, One World, One God”. This event started with a parade of all the classes. Two pupils from each class also joined the procession wearing the national costumes of selected countries.

Pastor Bryan Kimball Sy, a Junior Kinder parent, opened the event with a prayer and was followed by the singing of the national anthem and the school song led by selected Kinder pupils. As part of her welcoming remarks, Ms. Grace Tan, the school vice principal for student affairs, emphasized the parents’ role in leading their children to know God.

Afterwards, the preschool students confidently performed the English and Chinese dances that they had rehearsed for months. The early-grade pupils were also given the opportunity to render a touching song entitled “A Heart to Change the World” reminding the audience that Jesus loves us and we have to share that love to others too.

A portion of the program was also allotted for Caerwyn Azriel Hui of Kinder-Faithfulness to show off his amazing skill in Geography. Competing against an adult, the audience were in awe for this young boy named all the flags correctly. He was also able to locate the countries in a globe with so much ease. At the end of the program, the students excitedly danced with Chris and Joy, the school’s official mascots. Pastor Allan Rillera, a Nursery class parent, concluded the program with a prayer. For the second part of the Family Day, the preschool students and their parents gathered in the classrooms for a food preparation activity or cooking demo. The class of Toddler-Joy enjoyed making the favourite snacks in the Philippines, the halo-halo and turon. The Nursery-Peace class made about a hundred of Chinese dumplings (dimsum from China) while the Nursery-Love class prepared the shawarma, which is the ultimate on-the-go meal in the Middle East.

On the other hand, the class of Junior Kinder-Kindness enjoyed their brigadeiros, which is a sweet treat famous in South America. The Junior Kinder-Grace class made fairy breads from Australia. burger and French fries, both renowned in North America, were prepared by the pupils of Junior-Kinder Patience. Lastly, the Kinder classes joined together in the gymnasium as they made pizzas, which is well-known in the continent of Europe.
This year’s Family Day was definitely memorable for the pre-schoolers as both their hearts and tummies were filled with well-spent time with their parents and tasty food.